Use Zapier and Axiom together to automate anything!

If you work with no-code tools, you've probably worked with Zapier - the web's original glue to connect web-apps.

If there's an API for it, chances are, there's a Zap to automate it.

But what if there's no Zapier Integration, or the API is incomplete?

Plus many more! Uzing Zapier and Axiom together let's you achieve much more than either tool alone.

A trigger is an event that an app fires whenever a particular thing happens. For example, the Gmail app has a trigger that fires when an email hits your inbox.

An action is something an app can do in response to a trigger. For example, in the JIRA app, you might have an action which creates a new ticket.

Within Zapier, you can then use these triggers and actions to link systems together and create larger workflows. By combining the above trigger and action, you can now create a ticket in JIRA whenever an email lands in your inbox. Pretty cool!

This means that you can automate anything that you manually do yourself. Clicking on buttons, selecting items from lists, entering text into forms and copying and pasting data from one place to another are some of the most common browser actions, and ones you likely do many hundreds - even thousands - of times each day.

What's great about this is that for axiom to work, you don't need API access; just some kind of browser-based user interface, which all web software has. You can then do anything the interface allows you to do, without having to rely on the site's developers having implemented an API trigger or action. 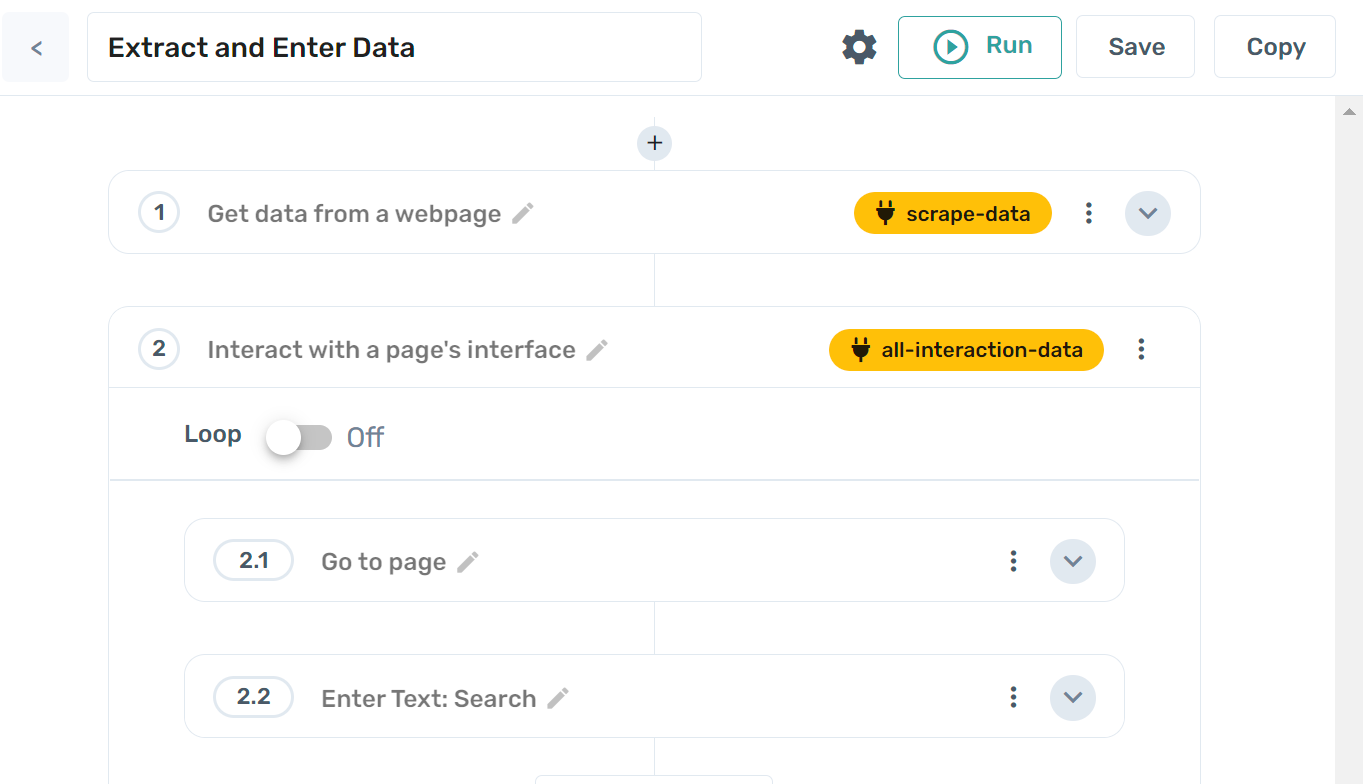 If there's a Zapier integration and it contains the triggers and actions you need, we recommend using it!

APIs are very well defined, and don't often change. If they do, the changes are usually tightly controlled behind different versions of the app - a feature Zapier supports well. This makes the connection very reliable.

Zapier's trigger system is also powerful because it lets you respond to events in real time. This cuts out complexity compared to more passive systems, which have to read lists of data and then determine what to do for each item. Zapier skips all of that by listening to the app directly, and immediately acting when it receives a signal.

However, there are scenarios when a system has a limited (or nonexistent) API, or where integrating using the provided API is abstract or unintuitive. Data can be formatted in ways that are hard to understand, and it can be tricky to figure out what you need to do.

This is where axiom excels. Because it uses the UI, and because every website has a UI, it doesn't matter whether a particular API trigger or action has been implemented - if you can do it, so can axiom.

This can be very useful in data extraction (web scraping), where many platforms don't give API access to their data. Social media platforms like LinkedIn or Instagram are unlikely to ever have Zaps.

UI automation can also be used for data entry by typing the required data directly into web forms. This is often useful with government forms, legacy systems, and niche e-commerce applications.

Smaller tools that are earlier in their development cycle have also often not yet had the resources to build an API, so this can be a great option for integrating with their functionality early.

Even if an API is provided, UI automation may be the more intuitive choice for non-coders.

For example, if you’re copy-pasting data from a complex analytics system into a spreadsheet, it's often easier to visually select data as it appears on-screen rather than trying to understand the data output of an API. In these systems, the UI's job is to make complex information digestible, and you can take advantage of this in your automation.

Finally, building an automation in a way that mirrors your normal work will often be easier to create, understand and maintain. This is because you don't have to map your existing well-understood process into a different one in order to automate it.

# No-code tools are most powerful when used together

The magic really starts to happen when you combine Zapier and Axiom together, giving you the best of both worlds.

By using these tools together, you can automate literally anything - and that’s not an exaggeration!

Learn more about why: connecting no-code tools together is the best way to build something new.

# How do I use Zapier and Axiom together?

Axiom has a Zapier app available on the pro tier, so you can trigger axiom from any Zapier integration:

It's possible to trigger Zapier from Axiom using either webhooks, or Google Sheets, which is available on our free tier.

Use webhooks when the data sent to Zapier will be relatively small:

If large volumes of data are being sent, both Zapier and Axiom have deep sheets integration, which makes data-driven automations much easier to handle:

If we can be of help, please don't hesitate to contact us for one-on-one help or take a look at our Documentation.

Sign up to our Newsletter for scraping & automation tips

Automate with Axiom.ai in minutes

Get started for free